The sugar binding structure of a GH78 α-ʟ-rhamnosidase from Streptomyces avermitilis (SaRha78A) revealed a ʟ-rhamnose binding module CBM67 (SaCBM67) within the six-domain arrangement [1]. SaCBM67 bound ʟ-rhamnose and ʟ-mannose with a Ka of 7.2 × 103 M−1 and 3.6 × 103 M−1, and free energy of binding ΔG of −5.3 kcal/mol and −4.8 kcal/mol, respectively, but it did not bind to ʟ-rhamnose in the presence of 5 mM EDTA [1]. Similarly, the D179A and N180A mutants of SaCBM67, in which removed hydrogen bonds with calcium abolish ligand binding, confirm the importance of calcium in the binding of SaCBM67 to its ligand [1]. No binding to ʟ-galactose or ʟ-fucose was observed [1]. 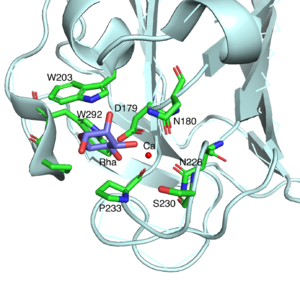 SaCBM67 is a ʟ-rhamnose binding module. The exo-binding manner with the shallow binding site of SaCBM67 suggests it is a type C CBM. SaRha78A (pdb: 3W5N) forms a multidomain structure comprised of six distinct domains, one α-domain (domain A: catalytic module designated SaRha78CM) and five β-domains (domains N, D, E, F, and C) [1]. Domain D is designated as SaCBM67 (P133-P297). SaCBM67 displays weak structural homology with a CBM32, CBM35, CBM36, and CBM60, which recognize their different ligands through either an exo- (CBM32 and CBM35) or endo-mode (CBM36 and CBM60) of binding. These CBMs all comprise a β-jellyroll structures and contain a second calcium atom that is integral to ligand recognition (which is absent in CBM32), in addition to a structural calcium (which is absent in CBM67). A central feature of the ʟ-rhamnose binding site in SaCBM67 (Figure 1, see also Fig. 3C of [1]) is a calcium ion that makes coordinate bonds with O3 and O4 of the sugar. The calcium interacts with SaCBM67 through D179, N180, N228, P233, and a water-mediated contact with S230. The bound ʟ-rhamnose also makes direct hydrogen bonds with W203, N180, and D179 through O2, O3, and O4 atoms, respectively. The C-6 methyl group points toward a small hydrophobic pocket comprising W203, P233, P291 and W292. No direct interaction with the C-6 methyl group explains why SaCBM67 is also capable of binding to ʟ-mannose.

CBM67 members are distributed not only in many bacterial GH78 α-ʟ-rhamnosidases, but also in some Basidiomycete lectins, family 1 pectate lyases, peptidases, and proteins of unknown functions. Protein alignment of candidate members of CBM67 identified five subfamilies within the constructed phylogenetic tree[1]. Although the calcium binding site is conserved in CBM67 members, these CBM67 members might show different sugar specificities because the ʟ-rhamnose binding residues in SaCBM67 are not retained in all the subfamilies. For example, the lectin from Pleurotus cornucopiae, containing two CBM67-like sequences in tandem with sequence identities with SaCBM67 of 25 and 35% for the N- and C-terminal modules, respectively, shows the highest affinity for N-acetyl-ᴅ-galactosamine[1].