The glycoside hydrolases of this family are in fact lytic transglycosylases (also referred to as peptidoglycan lyases) of bacterial origin and they constitute family 3 of the classification scheme of Blackburn and Clarke [1]. The prototype for this family is membrane-bound lytic transglycosylase B (MltB) from Escherichia coli [2]. These enzymes cleave the β-1,4 linkage between N-acetylmuramoyl and N-acetylglucosaminyl residues in peptidoglycan (Figure 1). No other activities have been observed.

The lytic transglycosidases, strictly speaking, are retaining enzymes. However, they are not hydrolases but rather catalyse an intramolecular glycosyl transfer reaction onto the C-6 hydroxyl group of the muramoyl residue leading to the generation of a terminal 1,6-anhydromuramoyl product (Figure 1) that lacks a reducing end [3]. No detailed analyses involving both steady state and pre-steady state kinetic studies have been reported, but the Michaelis-Menten (KM and Vmax) parameters have been estimated for Pseudomonas aeruginosa MltB acting on insoluble peptidoglycan sacculi [4]. 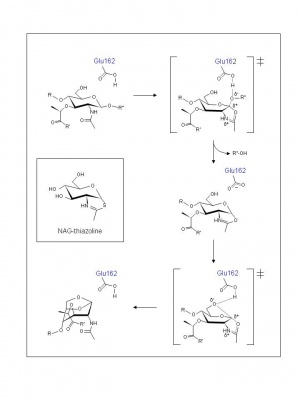 As with other lytic transglycosylases (families GH23, GH102, and GH104), the GH103 enzymes are thought to possess a single catalytic general acid/base residue. This residue has been identified as Glu162 in MltB from both E. coli and P. aeruginosa and, indeed, its replacement abolishes catalytic activity [4, 5]. The mechanism of action of family GH103 enzymes has been investigated the most compared to the lytic transglycosylases of the other families (GH23,GH102, and GH104).

Examination of crystal structures of E. coli Slt35 (a soluble proteolytic derivative of MltB) and theoretical considerations led to the proposal of a mechanism that accommodates a single catalytic residue at its active site. Thus, based on the complexes formed with murodipeptide, chitobiose, and the inhibitor bulgecin, a two-step neighboring group participation mechanism involving substrate-assisted catalysis has been invoked analogous to the family GH18 chitinases and chitobiases, family GH20 N-acetyl-β-hexosaminidases, and family GH23 lytic transglycosylases [6]. Thus, the catalytic residue Glu162 is proposed to serve initially as a general acid to donate a proton to the glycosidic oxygen of the linkage to be cleaved. At the same time the MurNAc 2-acetamido group acts as a nucleophile and attacks the anomeric centre. The transition state leading to the intermediate possesses oxocarbenium ion character (Figure 2). In the second step abstraction of the C-6 hydroxyl proton of the oxazolinium species by Glu162 which now serves as a general base leads to nucleophilic attack and the formation of 1,6-anhydromuramic acid product, again through a transition state with oxocarbenium ion character. The β-hexosaminidase inhibitor NAG-thiazoline (Figure 2) was found to inhibit P. aeruginosa MltB thus supporting the proposal for the formation of an oxazolinium ion intermediate [7], and the results of a site-directed mutagenesis study suggest that Ser216 orients the N-acetyl group on MurNAc at the -1 subsite of MltB for its participation in a substrate-assisted mechanism of action [8].

Three-dimensional structures are available for several family GH103 enzymes, the first solved being that of E. coli MltB (Slt35) [5]. The catalytic domain of the enyzmes possesses the well characterized α+β "lysozyme fold."