Reaction products released are mainly 1,3;1,4-β-D-tri- and tetrasaccharides (G4G3Gred and G4G4G3Gred), but they also release higher oligosaccharides of up to 10 or more contiguous 1,4-β-D-glucosyl residues with a single reducing terminal 1,3-β-D-glucosyl residue (e.g. G4G4G4G4G4G4G3Gred). These longer oligosaccharides originate from the longer regions of adjacent 1,4-linkages that account for approximately 10% by weight of 1,3;1,4-β-D-glucans in cell walls of the Poaceae [1].

The stereochemistry of the reaction has been determined experimentally and catalysis by GH17 enzymes occurs via a classical Koshland retaining mechanism with the β-anomeric configuration of the released oligosaccharide being retained [2]. Detailed kinetic analyses are available for three purified barley 1,3-β-D-glucan endohydrolases and two barley 1,3;1,4-β-D-glucan endohydrolases [2].

Active site labelling with epoxyalkyl β-D-oligoglucoside inhibitors identified Glu231 and Glu232 as the catalytic nucleophiles of the barley 1,3- and 1,3;1,4-β-D-glucan endohydrolases, respectively [3], located at the bottom of, and about two-thirds of the way along the substrate binding cleft. The general acid/base residue of 1,3;1,4-β-D-glucan endohydrolase was initially identified as Glu288 by chemical labelling procedures [3, 4], but this assignment was subsequently revised and Glu93 was proposed based on primary and tertiary structure similarity of GH17 enzymes with clan GH-A β-glycosidases [5, 6]. The 5-6 Å distance between Glu232 and Glu93 is typical of retaining enzymes. 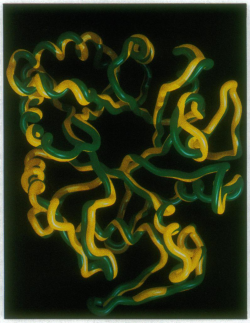 A deep substrate-binding cleft extends across the surface of the enzyme and can accommodate 6-8 glucosyl-binding subsites [7]. The open cleft enables the enzyme to bind at essentially any position along the 1,3;1,4-β-D-glucan substrate and hence to hydrolyse internal glycoside linkages. Like in other clan GH-A structures, the general acid/base and catalytic nucleophile glutamates are positioned on strands β-4 and β-7 [5, 6, 7].

The X-ray crystallographic data provide compelling evidence that the 1,3;1,4-β-D-glucan endohydrolases of barley evolved via the recruitment of pre-existing and widely distributed family GH17 1,3-β-D-glucan endohydrolases [6]. The similarities in substrate specificity between family GH17 and GH16 enzymes has arisen through convergent evolution; the family GH16 enzymes are members of clan-B and have a β-jelly roll structure.