Family GH73 contains bacterial and viral glycoside hydrolases. Most of the enzymes of this family cleave the β-1,4-glycosidic linkage between N-acetylglucosaminyl (NAG) and N-acetylmuramyl (NAM) moieties in the carbohydrate backbone of bacterial peptidoglycans. Because of their cleavage specificity, they are commonly described as β-N-acetylglucosaminidases. The enzymes from family GH73 are mainly involved in daughter cell separation during vegetative growth, and they often hydrolyze the septum after cell division (Acp from Clostridium perfringens [1], AltA from Enterococcus faecalis [2]). Occasionally GH73 enzymes are used during host-cell invasion such as the virulence-associated peptidoglycan hydrolase Auto from Listeria monocytogenes [3].

GH73 enzymes are mostly surface-located and often exhibit repeated sequences that could be involved in bacterial cell-wall binding (figure 1). Unknown repeated domains are appended for instance to LytD and LytG from Bacillus subtilis [4, 5], AcmB from Lactococcus lactis [6], and Auto from L. monocytogene [3]. Some of these repeated domains have been identified such as the carbohydrate-binding modules of family CBM50 (also known as LysM domains) appended for instance to AcmA of Lactococcus lactis [7], AltA from Enterococcus faecalis [2] and Mur2-Mur2 from Enterococcus hirae [8].

No kinetic parameters have been determined for any enzyme of the GH73 family, as the production of synthetic peptidoglycan substrates remains a challenge. 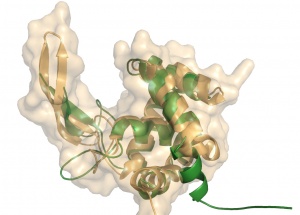 Crystal structures of GH73 are available and have been reported simultaneously, namely FlgJ from Sphingomonas sp. (SPH1045-C) [9] and Auto a virulence associated peptigoglycan hydrolase from Listeria monocytogenes [3]. The two GH73 show the same fold, with two subdomains consisting of a β-lobe and an α-lobe that together create an extended substrate binding groove (Figure 2). With a typical lysozyme (α+β) fold, the catalytic domain of Auto is structurally related to the catalytic domain of Slt70 from E. coli [10], the family GH19 chitinases and goose egg-white lysozyme (GEWL, GH23) [11]. FlgJ is structurally related to a peptidoglycan degrading enzyme from the bacteriophage phi 29 [12] and also to family GH22 and GH23 lysozymes. 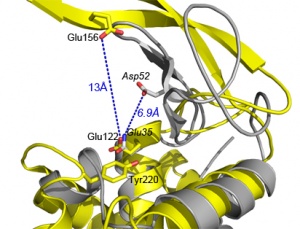 Figure 3. Comparison of Auto (in yellow) and HEWL (in grey) active sites. Catalytic residues are in italic for HEWL (GH22)

The catalytic general acid is a glutamate, strictly conserved in the GH73 family. Its catalytic role has been evidenced in FlgJ [13], Auto [3], AcmA [7] and AltWN [14]. Glu185 in FlgJ and Glu122 in Auto have also been identified through structural comparison with the actives sites of GH19, GH22 and GH23 enzymes [3, 9]. However, in contrast to GH22 lysozymes, the structures of FlgJ and Auto both lack a nearby second catalytic carboxylate such as Asp52 in hen egg white lysozyme (HEWL), which represents the catalytic nucleophile [15] (see figure 3). Interestingly this amino acid is strictly conserved in the sequences of GH73 enzymes but it is situated 13Å away from the Glu general acid in the active site.

The identification of the catalytic nucleophile/base is not conclusive. On one hand, the mutations of the putative distant nucleophile Glu156 in Auto [3] and Glu224 in FlgJ [13] were accompanied of a large decrease in the catalytic activity, compatible with the role of a base activating a water molecule for the nucleophilic attack on the opposite side of the sugar ring (inverting mechanism) [3]. On the other hand, significant residual activity was found when the putative nucleophile/base residue of AcmA and AltWN were converted to glutamine or asparagine (for Asp1275 in AltWN), which is more compatible with a substrate-assisted catalysis (also termed "neighboring group participation" mechanism) involving anchimeric assistance by the acetamido group of the GlcNAc moiety. In such mechanism a neighbouring tyrosine is frequently involved. In family GH73, a Tyr residue is highly conserved (Fig2: Tyr220 in Auto), in close proximity to the catalytic general acid Glu. Substitution of this Tyr residue in FlgJ, AcmA and AltWN was associated with a reduced activity similar to that resulting from the mutation of the general acid Glu [7, 13, 14]. The neighboring group participation mechanism involving the general acid Glu and the Tyr as essential catalytic residues found support from the sequence comparison of family GH73 with families GH20, GH18, GH23 and GH56, which do not have a catalytic nucleophile residue [7].