The main activity assigned to characterized enzymes in PL4 is degradation of the plant cell wall component rhamnogalacturonan I, a component of pectin hairy regions. Rhamnogalacturonan I is a heteropolymer built up by the disaccharide unit [α-L-Rha-(1,4)-α-d-GalUA-(1,2)], with often extensive branching (arabinans, galactans and arabinogalactans) at the O2 and O3 of the galacturonic acid units. Both rhamnose and galacturonic acid units are present in Rhamnogalacturonan I in their pyranose forms. Characterized PL4 enzymes are therefore Rhamnogalacturonan lyases (EC 4.2.2.23). The best characterized enzyme in the family, the Aspergillus aculeatus Rhamnogalacturonan Lyase (AaRGL4) [1] cleaves the α-1,4-glycosidic bonds between L-rhamnose and D-galacturonic acids, and produces an unsaturated product with α-Δ-(4,5)- d-galacturonic acid at the non-reducing end [2]. Other biochemical studies [3] showed that the minimum substrate requirement is a deacetylated dodecamer, with preferential cleavage four residues from the reducing end Rha, but the structural studies (see below) have demonstrated that smaller ligands can be bound [4]. The effect of branching depends on the nature of the side chains, as removal of arabinan chains increases activity, while removal of galactose side chains reduces activity [3]. The branching effects may account for the fact that some experiments have shown an average size of 25-30 sugar units in complete digestions of rhamnogalacturonan I by AaRGL4 [4]. In CAZy [5, 6], PL4 is divided in 5 subfamilies with members from bacterial and eukaryotic kingdoms (fungi and plants) [7]. Apart from subfamily 2, consisting primarily of plant members, the subfamilies do not seem to follow phylogenetic divisions, and may reflect yet undiscovered differences in substrate preferences.

Degradation of rhamnogalacturonan is via β-elimination, which introduces a double bond in the non-reducing d-gactopyranosyluronic acid unit. The optimum pH of activity is low (pH 6.00 as reported for AaRGL4 [3]) compared to other polysaccharide lyases such as pectate lyases, which tend to have rather basic pH optima. Another major difference to the pectate and other polysaccharide lyase mechanisms, is that divalent metal ions are not required by PL4 for catalysis. Both the low pH optimum and the lack of strict metal requirement show parallels between the PL4 mechanism and the mechanism of pectin lyases [8], which despite belonging to PL1, have diverged significantly from the pectate lyases. A mechanism for PL4 has been proposed based on mutagenesis and structural studies of a ligand complex (see below)[4].

Catalytic residues were first suggested on the basis of sequence conservation and location on the 3D structure [9], and subsequently verified by site directed mutagenesis in AaRGL4 to be Lys150 and His210[4]. In the proposed mechanism [4], based both on mutagenesis and structural considerations, Lys150 is the proton abstractor, while His210 plays the role of proton donor. In most other polysaccharide lyase mechanisms a proton donor has not been identified. A Lys as proton abstractor seems in conflict with the low pH optimum, but pKa calculations with a model of a substrate complex suggest that desolvation effects may help lower the pKa of this residue [4]. 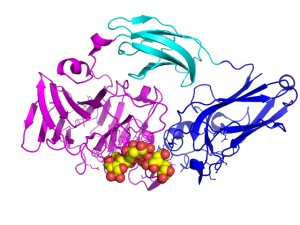 Structure of AaRGL4 K150A in complex with a hexasaccharide. Domain I is in magenta, domain II in cyan, and domain III in blue. The product is shown in sphere representation. Figure made in pymol

The three-dimensional structure of PL4 rhamnogalacturonan lyase from Aspergillus aculeatus AaRGL4 [9] [1NKG], revealed that it is shaped as a flattened oval disk of approximate dimensions 90 x 58 x 40Å. The secondary structure is predominantly β-sheet arranged into three distinct modular domains, I, II and III. The N-terminal domain I, containing the catalytic residues and formed by residues 1-257, is folded into a β-super-sandwich, the fold of domain II comprised by residues 258-336 has a topology that is similar to fibronectin type III (FnIII). The residues 337-508 form the C-terminal domain III which displays a jelly roll β-sandwich fold and is structurally homologous to carbohydrate binding modules. The C-terminal hosts a structural calcium ion, not thought to be involved in catalysis. The structures of catalytic residues variants [2XHN, 3NJX]and a complex of the K150A catalytically impaired variant with substrate bound from -3 to +3 subsites[3NJV]have been also determined [4].