The AA11 family of Lytic Polysaccharide Mono-oxygenases (LPMOs; first described in [1]) was identified using a bioinformatic 'module walking' approach [2]. Many AA9 proteins have C-terminal domains, which are often cellulose binding CBMs (eg. CBM1), but some have no known function (also see [3]). Sequence searches using one of these domains (termed X278) returned hits where the domain was fused with GH18 family members and another set of domains of unknown function. Closer examination of these domains revealed that they had a likely signal peptide followed by a histidine, typical of LPMOs, though they otherwise lacked significant sequence similarity to either AA9 or AA10 family members.

The only AA11 to be isolated to to date is from Aspergillus oryzae which showed copper dependent oxidase activity on chitin in the presence of ascorbate. The observed products were a mixture of mainly aldonic acids and unmodified oligosaccharides with a small amount of a -2Da species, which may be C4 oxidation or the C1 lactone prior to ring opening. It is unknown at this stage whether AA11 family members will show any activity towards other substrates, whether they oxidise at positions other than C1 on the sugar ring or what the role of the X278 domain often found at the C-terminus is (although a chitin binding function would seem logical given its presence on GH18 chitinases and AA11).

AA11s, like AA9s and AA10s, are copper dependent mono-oxygenases but the chemical mechanism by which these enzymes perform the reaction is yet to be elucidated. Recent quantum mechanical simulations suggest that AA9s are likely to oxidise cellulose using a copper-oxyl, oxygen rebound mechanism [4] but further work is needed in this area. The differences in the copper coordination geometries between the families might further hint that they might use different mechanisms (Reviewed in [5]). As is the case for AA10s, the natural electron donor for AA11s is unknown, with no equivalent of cellobiose dehydrogenase yet discovered that is active on chitobiose. It is also unknown whether the N-terminal histidine in AA11s is N-methylated (as the enzyme in the published study was expressed in E. coli and not a filamentous fungi) as is seen in AA9s and what effect this will have on the reaction performed by the enzyme.

Like AA9 and AA10, AA11 utilises copper, which it binds through the "histidine brace" consisting of the N-terminal histidine's amino and imidazole groups together with the imidazole sidechain of another histidine. It is unknown at this stage whether AA11s possess the methylated N-terminal histidine observed in AA9s as the protein was produced recombinantly in E. coli which does not carry out this modification. Like AA9, a tyrosine sidechain is in close proximity to the copper ion but it does not directly coordinate the metal in this case. AA9s typically leave the opposite side to the tyrosine open to solvent where water molecules are observed coordinating the metal ion [6, 7, 8, 9]. In AA10s there is an alanine in this position, which causes a distortion in the copper coordination geometry away from octahedral [10, 11, 12, 13]. Interestingly AA11 has an alanine in a very similar position giving an active site structure somewhere between that of AA9s and AA10s. The structure was only determined with Cu(I) in the active site so the coordination geometry of Cu(II) was not directly observed but electron paramagnetic resonance spectroscopy confirmed that the copper coordination geometry lies somewhere between that of AA9s and AA10s [2]. 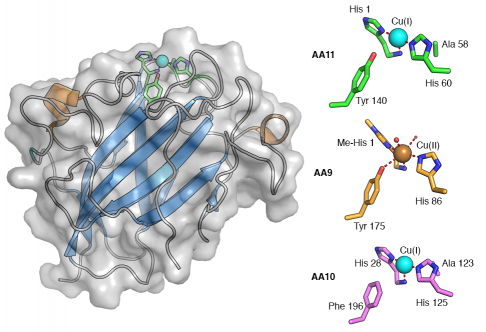 Figure 1. Structure of AA11 from Aspergillus oryzae (PDB ID 4MAI [2]). On the left the overall structure is shown in cartoon representation with the surface of the protein shown in gray. The active site is shown at the top of the structure with the copper ion shown as a sphere and surrounding active site residues shown as sticks with green carbon atoms. On the right; at the top is a view of the active site showing the coordinatiuon of the copper ion by the “histidine brace”. Below are shown the active sites of Thermoascus aurantiacus AA9 (PDB ID 2YET [9]) and Bacillus amyloliquefaciens AA10 (PDB ID 2YOY [10]) in the same orientation showing how the AA11 forms a hybrid active site between the two families.

Though AA11 does not share significant sequence similarity to AA9 and AA10 proteins, the core fold of the protein is remarkably similar forming a typical ß-sandwich immunoglobulin like fold [2]. The active site is at the centre of a slightly concave surface which, consistent with observations in AA10s [11, 13], has very few aromatic residues suggesting that it also primarily interacts with chitin via H-bonding interactions. Given that LPMOs are oxidoreductases there is increasing interest in the role of electron transport chains within these proteins [8]. Internal tyrosine and tryptophan residues have been implicated in these roles in AA9s [8] and AA10s [5] respectively. Similarly in AA11s it is possible to trace a path through the core of the protein using tryptophans, methionine and other hydrophilic residues to the distal face of the enzyme from the active site suggesting that there may be a similar electron transport path in AA11s though these are yet to be experimentally verified in LPMOs.