CBM77 is a bacterial family of binding modules that comprises around 110 amino acids. Only the founding member of this family, CBM77RfPL1/9 has been characterized. This carbohydrate-binding module found in Ruminococcus flavefaciens binds exclusively to homogalacturonan (pectin) with low degrees of methyl esterification (DE) [1]. By isothermal titration calorimetry, CBM77RfPL1/9 displays high affinity for low DE pectins such as, lime DE 11% and citrus pectin DE 30% (KA 1.8 x 105 M-1 and 1.1 x 104 M-1, respectively). This binding module displays a reduction in affinity as the DE of the ligand increase. Indeed CBM77RfPL1/9 exhibits no binding to polygalacturonic acid with a DE ≥80%. This binding module displays optimum binding to oligosaccharides of α-1,4-D-Galacturonic acid (GalA) with a degree of polymerization of 7 to 8. Additionally, the presence of a chelating agent (EDTA) did not influence CBM77RfPL1/9 affinity indicating a divalent cation independent binding mechanism [1]. The only other example of a CBM that binds to homogalacturonan backbone is CBM32 from Yersinia enterolitica (YeCBM32) (which is not a component of an enzyme) [2]. 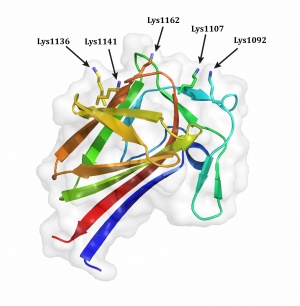 The three-dimensional structure of Ruminoccocus CBM77RfPL1/9 (5FU5) solved using X-ray displays a beta-sandwich fold in which the 13 antiparallel β-strands are organized in two β-sheets [1].

The key residues implicated in ligand binding were identified by site-direct mutagenesis. The canonical ligand binding site of an endo-binding type B CBM adopts a cleft-like structure. However, in CBM77RfPL1/9, the alanine mutation of aromatic or basic amino acids in the concave surface had no effect on ligand binding. Only the alanine mutation of three invariant basic residues (Lys1092, Lys1107, and Lys1162) located at the convex surface of CBM77RfPL1/9 abrogated binding to polygalacturonic acid (PGA), showing the location of the binding site. The single alanine mutants of two distal basic residues (Lys1136 and Lys1141) displayed only a modest reduction in affinity for PGA when compared with the wild-type protein; however, the double mutation Lys1136A/Lys1141A resulted in complete loss of binding indicating that these lysines display functional redundancy. Additionally, based on the mutant binding data, the CBM77RfPL1/9 ligand recognition surface is ~ 25 Å suggesting that the binding site can accommodate a hexasaccharide [1].

Ruminoccocus flavefaciens CBM77RfPL1/9 is a component of an enzyme that contains two catalytic modules, belonging to polysaccharide lyase families 1 (PL1) and 9 (PL9) and a C-terminal dockerin module. Consistent with the CBM77RfPL1/9 specificity, both PL enzymes display pectate lyase activity [1].

This CBM family contains 26 members from a range of bacteria suggesting a general role in pectin degradation that is not specific to the cellulosome organization or the rumen environment. In the majority of the proteins, the CBM77 is appended to PL1 catalytic modules although PL9 sequences are also present [1].

Additionally, the binding of CBM77RfPL1/9 was also tested in the context of plant cell wall. This binding module specifically labelled homogalacturonan in Tobacco stem sections [1].