Glycoside hydrolases of GH84 include β-N-acetylglucosaminidases but members have often also been annotated as β-N-acetylhyaluronidases. This second annotation arises from the initial cloning of the enzyme and its early sequence analysis, which suggested sequence similarity to β-N-acetylhyaluronidases [1]. Biochemical analysis of a GH84 enzyme annotated in as a hyaluronidase, however, revealed that it had no such activity [2] and structural studies of other homologues have suggested the active site would be unable to process polymeric hyaluronan. Humans possess only one enzyme belonging to GH84, first defined by its unique biochemical properties including activity at neutral pH and selectivity for N-acetylglucosamine residues. The human GH84 enzyme was labelled as HexC to distinguish it from the human GH20 lysosomal enzymes HexA and HexB. HexC was first cloned from a meningoma library using autologous serum and defined as meningoma expressed antigen 5 (MGEA5) [1]. It was later cloned and biochemically characterized as O-GlcNAcase, a nuclear and cytoplasmic enzyme targeting glycoprotein substrates modified by β-linked GlcNAc residues linked to serine and threonine residues [3, 4]. A truncated, nuclear-localized isoform of human O-GlcNAcase lacking a putative C-terminal histone acetyl transferase domain retains similar kinetic properties (aside from a much lower activity) and inhibition patterns as the full-length cytosolic isoform and is consistent with hexosaminidase activity residing in the N-terminal domain, which shares similarity with other GH84 enzymes [5]. In contrast to the β-hexosaminidases of GH20 a relaxed specificity for substitutions of the N-acyl group is observed with residues significantly more bulky than the N-acyl group being tolerated [6].

Numerous carbohydrate and carbohydrate like-scaffolds have been reported as potent inhibitors of GH84 enzymes. These include "NAG-thiazolines" [6], PUGNAc (O-(2-acetamido-2-deoxy-D-glucopyranosylidene)amino-N-phenylcarbamate) [10], GlcNAcstatins [11, 12], 6-epi-valeinamines [13], and 6-acetamido-6-deoxy-castanospermine [14]. The greater tolerance of the N-acyl binding pockets of GH84 enzymes for bulky sidechains compared to those of GH20 enzymes has enabled the development of inhibitors that are not only highly potent but also highly selective in their inhibition of human nucleocytoplasmic O-GlcNAcase (GH84) over human lysosomal β-hexosaminidases [6, 15, 16]. Many of these families of inhibitors possess structural characteristics reminiscent of the oxocarbenium ion-like transition states of glycosyl group transfer and, as such may loosely be termed 'transition state analogues'. An analysis of NAG-thiazoline- and PUGNAc-derived inhibitors of human O-GlcNAcase has shown that only the NAG-thiazolines position the inhibitors and their N-acyl side-chains within the hydrophobic binding pocket in a manner consistent with the species found along the reaction coordinate [15]. As such NAG-thiazoline inhibitors may be termed 'Bartlett-type' (free-energy relationship-based) [17] transition state analogues. Significantly streptozotocin, a widely used diabetogenic compound whose toxicity towards pancreatic β-cells was hypothesized to arise from its ability to act as an inhibitor of human O-GlcNAcase, neither binds covalently to GH84 enzymes [6, 18, 19], nor is a particularly potent inhibitor of human O-GlcNAcase [6, 20, 21].

Studies of two mutants of human O-GlcNAcase established that adjacent aspartate residues, Asp174 and Asp175, act as critical components of the catalytic machinery of this enzyme [22].

The mutant Asp174Ala showed significantly decreased activity towards O-aryl N-acetylglucosaminides possessing either good or poor leaving groups and it was argued that this is consistent with its role as a residue responsible for the orientation and polarization of the N-acyl nucleophile.

The reported crystallization of Clostridium perfringens NagJ (CpOGA) [23] was followed by solved structures for that enzyme [24] and Bacteroides thetaiotaomicron β-glucosaminidase (BtOGA) [24]. In common with the chitinases of family GH18 and the exo-acting β-hexosaminidases of GH20 the catalytic domain is a (βα)8-barrel structure. The structure of human O-GlcNAcase has not been solved but both bacterial homologues are good models of both the active site and catalytic domain of human O-GlcNAcase. More recently the structure of the GH84 β-hexosaminidase from Oceanicola granulosus has been solved and shown to possess good sequence identity with the catalytic domain of the human enzyme [25]. Furthermore, the C-terminal domain of this protein also displays notable sequence identity with the spacer domain, which separates the domains possessing O-GlcNAcase and histone acetyltransferase activities) of the human enzyme. 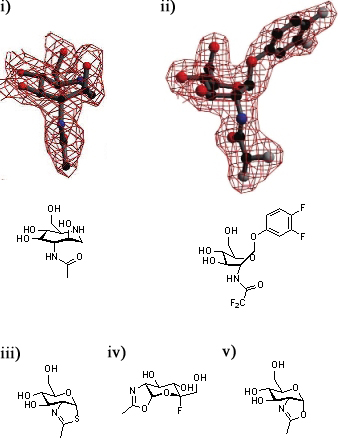 A series of crystallographic studies on Bacteroides thetaiotaomicron β-hexosaminidase have used a variety of small molecules to define the conformational itinerary for this family of enzymes. Substrate distortion from the stable 4C1 conformation found in solution to a bound 1,4B / 1S3 conformation was supported by the crystal structure of the wild-type enzyme in complex with 6-acetamido-6-deoxy-castanospermine [14] and the 7-membered ring-containing azepane [26]. This distortion was confirmed by the structure the wild-type enzyme in complex with the substrate 3,4-difluorophenyl 2-deoxy-2-difluoroacetamido-β-D-glucopyranoside [27]. Early studies of the wild-type BtOGA-bound thiazoline show that this intermediate is found in a 4C1conformation [6]; subsequent studies have shown that oxazoline intermediates are bound in this conformation to BtOGA active site mutants [27].

First sterochemistry determination
1H-NMR studies of human O-GlcNAcase established that it hydrolyzes the product with retention of anomeric stereochemistry to give the β-configured hemiacetal product, which then anomerises in solution [7].
First catalytic nucleophile identification
This family of enzymes uses a mechanism of neighbouring group participation, in the the substrate N-acetyl group acts as a nucleophile. This was first established through the use of free energy relationships studies [6].
First general acid/base residue identification
Studies of human O-GlcNAcase mutant Asp175Ala identified reactivity patterns (free energy relationships, pH-activity profiles) consistent with the action of Asp175 as the catalytic general acid/base [22].
First 3-D structure
The structures of Bacteroides thetaiotaomicron O-GlcNAcase [28] and Clostridium perfringens NagJ [24].