CBM20 modules bind starch granules (raw starch), its soluble components amylose and amylopectin as well as derived maltooligosaccharides (maltose, maltoheptaose, maltodecaose). Furthermore ɑ-, β-, and γ-cyclodextrin, which mimic amylose, have been used for studying CBM20-carbohydrate binding. An overview of ligand specificities and affinities of specific CBM20s can be found in [1]. 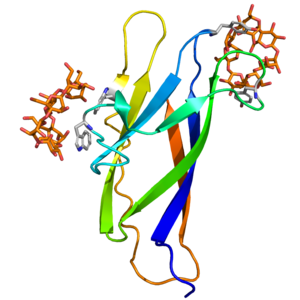 Figure 1. The NMR structure of the CBM20 from the Aspergillus niger GH15 glucoamylase with β-cyclodextrin bound to both binding sites (PDB ID 1AC0 [2]). The prominent binding site residues are shown as sticks.

The CBM20 members are type B CBMs and their overall fold is a β-sandwich (Fig. 1). At least one but more typically two binding sites have been found in structures with CBM20 in complex with bound carbohydrate. Such complexes have been studied for modules originating from several amylolytic enzymes, e.g. GH13_2 cyclodextrin glucanotransferase (CGTase) from Bacillus circulans [3], GH14 β-amylase from Bacillus cereus [4] and GH15 glucoamylase from Aspergillus niger [2], as well as the human glucan phosphatase laforin [5]. The two binding sites of CBM20 have been best illustrated in the NMR structure of the isolated module from A. niger glucoamylase complexed with β-cyclodextrin (Fig. 1) [2] and the X-ray structure of the module of the intact B. circulans CGTase in complex with maltose [3]. Binding site 1, important for raw starch binding ability, is formed from two tryptophan residues (Trp543 and Trp590 in the glucoamylase and Trp616 and Trp662 in the CGTase) making a compact and rigid hydrophobic site exposed on the surface that is well adapted to bind glucose residues in the cyclodextrin ligands, considered as starch mimics. This small and easily accessible site may function as the place where the starch is initially recognized and it does not change ﻿conformation after β-cyclodextrin binding when compared to the ligand-free CBM20 [6]. It is worth mentioning that both tryptophan residues make stacking interactions with glucose rings and are conserved in the sequence alignment of CBM20s [7]. This is not the case, however, for the aromatic residues stacked against glucose rings in binding site 2, which may function to guide the starch chains to the active site and is thus more extended and flexible. Binding site 2 aromatic amino acids undergo a larger conformational rearrangement when binding the β-cyclodextrin [2]. While there are two tyrosines (Tyr527 and Tyr556) in the glucoamylase binding site 2, only one aromatic residue (Tyr633 in CGTase, corresponding to Tyr556 in glucoamylase) is believed to play the analogous role in the CGTase. On the other hand, a third well-conserved tryptophan residue (Trp636 in CGTase, corresponding to Trp563 in glucoamylase), although buried and thus not able to interact with β-cyclodextrin directly, was found to be involved in making contacts with several residues at binding site 2 [2].

The CBM20 from the A. niger glucoamylase has been shown not only to bind starch but also to disrupt its surface, thereby enhancing the amylolytic rate [8]. A CBM20 from an auxiliary activities family AA13 starch polysaccharide monooxygenase was shown to be important for amylose binding and activity on amylose [9]. The enzymes which have CBM20 modules have specificities predominantly from the ɑ-amylase families GH13 and GH77, but can also belong to the GH14 β-amylases and GH15 glucoamylases [10]. Among other CAZy GH families, the CBM20 is in some cases found associated with enzymes from GH31, GH57, GH119 and the auxiliary activities family AA13. Furthermore, CBM20 modules have been recognised in enzymes where the catalytic domain is not classified in CAZy. Examples are phosphoglucan water dikinase, glycerophosphodiester phosphodiesterase-5, laforin, and genethonin-1 [7]. The CBM20 modules are commonly found as a single copy and usually appear without SBDs (starch-binding domains) from other CBM families within the same protein, although co-occurence has been observed with CBM25, CBM34, and CBM48 [7].